“I submitted the nomination on a bit of a hope and a prayer” said Nelson, “but I still did so thinking that completing the full renovation of such a prominent building on East Wisconsin Avenue and helping to bring retail back to the east end of the central business district might overcome any objection…and evidently it did!”

A Building with a Strong History had Fallen on Hard Times

The 600 EAST building was built in 1912, designed by renowned local architects Schnetzky & Sons for the Milwaukee Gas Light Company. It housed the company’s appliance and fixtures store and originally only had two stories. A third story was added in 1923 to accommodate the growth of the company. By 1929, the Milwaukee Gas Light Company had outgrown the building entirely and built a much larger tower just next door at 626 East Wisconsin Avenue now known as the Gas Light Building. 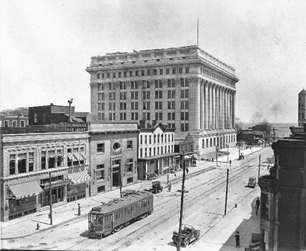 In 1931, the upper two stories of the building became the home of the Spencerian Business College. Founded in 1863, the Spencerian Business College was one of the first business schools in the nation and offered courses in business principles and practice, law and civil government as well as business penmanship. As it was known at the time, Spencerian Script was a refined form of handwriting that became the foundation of American business writing and what would become our classic cursive font.

By 1951, the Spencerian Business College had moved out, being replaced by a number of tenants, including the Ambition Shoe Repair Shop and Lyon Drug Company, a pharmacy and soda fountain that sold pharmaceuticals and served drinks and ice cream from their first-floor location. This also marked a time when the building was under the ownership of the Community Welfare Council. 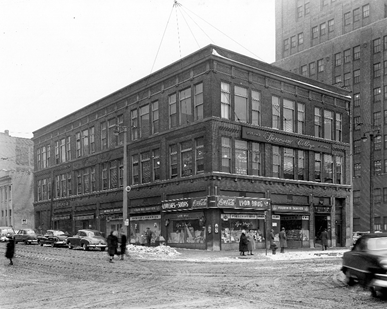 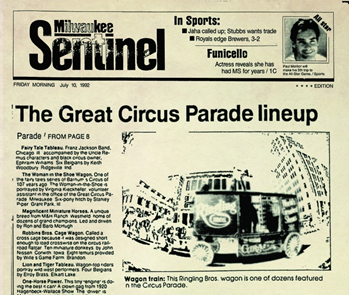 By 2006, the location was mostly a forgotten remnant of the past, with only a small percentage of the total building occupied by tenants. It was demoted to a deteriorating Class C commercial building by the city of Milwaukee. It was at this time that Dan Nelson, Jr., was looking to move his advertising agency, Nelson Schmidt Inc., from their location on the corner of Wisconsin Avenue and Water Street. A chance showing of vacant office space on the upper floors of the 626 East Wisconsin Avenue building led Nelson’s eye to the building next door. Seeing that the building was underutilized, he decided that it would be in his best interest to stop renting space from other landlords and purchase something of his own.

A New Lease on Life

After purchasing the building, Nelson immediately began the process of renovating the location, starting with the 2nd floor and lower level. Tearing everything down to its bare essence, the ceiling was exposed to showcase the beautiful Douglas Fir timbers. The walls were stripped down to the Chicago Pink brick. The columns were refurbished to highlight the hand-forged steel. The result was a beautiful, open-air office setting, perfect for the well-established advertising agency that would make the building their headquarters. 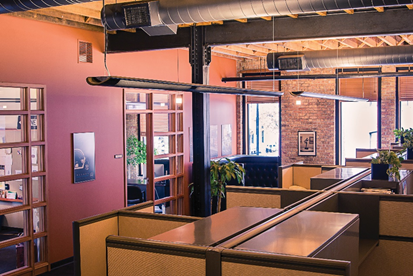 The eastern-most end of Wisconsin Avenue has very little retail and the city was hungry (literally) for something new to bolster this part of the Central Business District of Milwaukee. In 2013, at a cross-roads as to what to do with the then vacant 1st floor, it was decided to open it back up to the public as a retail location, birthing the 600 EAST Café & Business Center. With the same exposed brick, metal and wood, the public was able to get a sample of what the agency had to work in everyday. 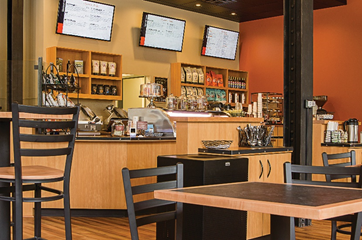 Finally, in 2021, the final leg of a nearly 15-year journey was realized when the 3rd floor was completely renovated to match the aesthetic of the rest of the building. Again, stripping everything down to its core, the construction team and Nelson were ecstatic when they found a hidden gem hiding behind layers of lathe and plaster and drywall. When the building was first erected in 1912, it shared the outside wall of the building directly next to it, as seen here: 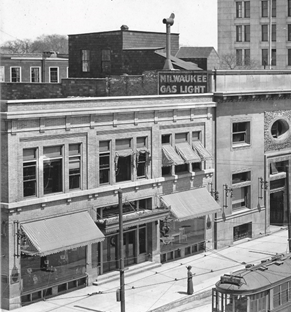 When the third story was built, the sign for the Milwaukee Gas Light Company was hidden from view, until 2021 when it was re-exposed and discovered to still exist, now as the interior wall of the southeast corner of the building: 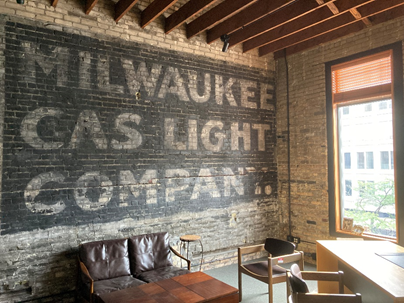 Future plans for the building include enhancements such as a green roof to seasonally supply 600 EAST Café with fresh produce as well as solar and wind re-powering.

We Deliver Customers.® Nelson Schmidt Inc. is an independent full-service marketing agency with offices in downtown Milwaukee and Madison, Wisconsin. The agency is one of the Top 200 Marketing Agencies of 2020 according to Chief Marketer and serves U.S. and international clients within select considered purchase industries. Nelson Schmidt is a member of MAGNET, the Marketing & Advertising Global Network, ANA and PRSA. For more information visit NelsonSchmidt.com.